Map of Algae Projects in the USA 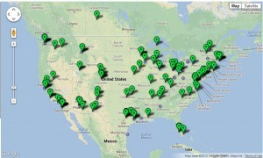 67 percent of algae producers said they plan to expand capacity in 2013: The Algae revolution exists from one coast to another, from one side of the globe to the other. Recently the Algae Biomass Organization produced a map showing algae projects taking place in the USA. This map detailing facilities and research projects, and illustrating a nationwide opportunity for a new and growing industry that is moving to supply the U.S. with algae-derived renewable fuels, feeds, fertilizers, chemicals and other products.

The algae industry map displays the placement of algae-related businesses, research establishments, domestic labs, trial and industrial campaigns as well as other initiatives carried out by ABO members and non-members as well. ABO will regularly revise the guide as innovative businesses, campaigns and investigation are launched.

A current ABO review of greater than 470 algae business associates demonstrates that 67 percent of algae manufacturers said they intend to broaden capability in 2013, and greater than 95 percent of companies think  that algae-based fuels just might take on non-renewable fuels as soon as 2020. The final results are just like growth and cost targets documented in the identical market research performed a year ago.

“When you see a visual display like this you get a real feel for how far reaching is today’s algae industry. Algae entrepreneurs, researchers, companies and projects come from every corner of the United States,” said Mary Rosenthal, executive director of the ABO. “Our members are proving algae can produce a wide variety of products, grow in wide range of climates, and provide economic benefits to rural and urban areas without harmful impacts on our land or fresh water.”

What this means to the "Rest of Us"

Algae based bio refineries and micro farms are running full steam ahead as more and more people are jumping on the bandwagon. The map is by no complete as I know of other projects, both in the US and abroad, who aren't listed. It does appear the window of opportunity is closing in the US though.

Algae, at least in the US, is becoming hyper-competitive. (No surprise there) Another interesting aspect of the map is that it is international in scope, showing the major players overseas as well.

Notice in Central America, and South America, as well as Africa is mostly devoid of activity. This suggests to me a wealth of opportunity in those places.

One troubling aspect of the map is that it doesn't show any activity in India or Brazil. India, as well as Brazil, have been making quite a few strides in algae based refineries in recent years and are poised to become leaders in their own right. Also Australia isn't completely represented as well.